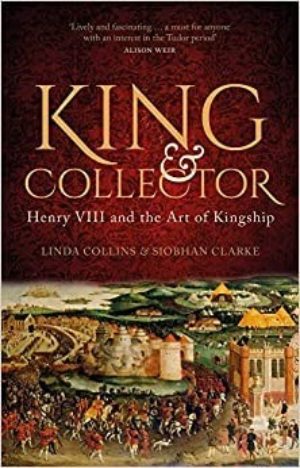 A whole new way of looking at Henry VIII that reveals a myriad of quirky, little-known facts

You won’t be surprised to learn that at Tudor Times we have read a number of biographies of Henry VIII, from light introductions to scholarly tomes, so the prospect of another one, although always interesting, did not set the pulses racing. I was therefore delighted to learn something new about all phases of the king’s life – with new and curious facts popping up every few pages.

The literary marriage of Linda Collins, a member of the Arts Society, and Dr Siobhan Clarke, a historian and lecturer, both with many years’ experience at Historic Royal Palaces, has proved a great deal more successful than any of Henry’s own marriages. Between them, the authors have developed a clear, straightforward style that briskly carries us through the narrative of the king’s life. But the real joy of this book is the way the authors have illustrated the political and personal facts with vignettes about the stunning artworks that surrounded the king, from the early works commissioned by his father, to the incredibly valuable tapestries that Henry himself owned.

Collins and Clarke do not present Henry as an art connoisseur in the way that King Charles I was later to be – for Henry, art, textiles, jewels and clothes were not so much things to be admired in themselves, but foils to project his own magnificence. Nevertheless, as a man who was a clever judge of the abilities of others, Henry obviously recognised great artistic skill when he was confronted by it.

Each chapter covers a different aspect of Henry’s life and reign, and shows how he deliberately cultivated and expanded his image to strike awe into his subjects, and terror into his enemies. The marvellous suits of armour (did you know that the average weight of 16th century army was similar to the weight of a modern British infantryman’s kit? Surprising, isn’t it?) that presented Henry as the heir of the conqueror of France, Henry V: the war of tents with François I at the Field of Cloth of Gold that substituted free-flowing wine for free-flowing blood: and, greatest of all, the Abraham Tapestry series that proclaimed Henry as the link between God and the Church in England, are all beautifully set in context by the authors. We learn about the practical aspects of tapestry-weaving, and how the surviving items are cared for today, we find out more about the court fools who appear in paintings with the king, and finally, the authors bring us up to date with the status of many of Henry’s pieces in the current Royal Collection.

This book is ideal for any student not just of history, but also of beauty and art. The review copy was black and white, but I am tempted to spring for the hardback version, to see the wonderful artworks in colour, and urge you to do the same.