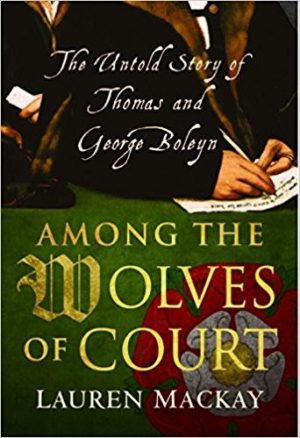 You might think you know the Boleyn men, but prepare to have your pre-conceptions entirely blown away.

As any good advertiser knows, humans like sound-bites – shorthand ways of expressing a single idea – the Virgin Queen, the Reformation, Bloody Mary, the Wars of the Roses, or even, dare I say it, ‘Leave means leave’.  But behind these catch-phrases there is always a complex and nuanced reality.  In the case of Thomas Boleyn, the sound-bite that has bedevilled him for 150 years of historiography, is that he climbed to power over the naked bodies of his daughters.  His son George has had a slightly greater range of characterisations, of which ‘non-entity, trading on his sister’s rise to power’ is probably the kindest.  Dr Mackay’s combined biography of the men seeks to dispel these notions through a committed act of scholarship – and I have to say, she entirely succeeds.  Thomas the diplomat, the negotiator, the councillor, even Thomas the jouster, are explored in detail.  His career began long before either of his daughters was more than a toddler, and followed a steady trajectory. Of particular interest, is Dr Mackay’s re-interpretation of Thomas’ relationship with Wolsey – she challenges the black and white picture of the Boleyns doing everything they could to bring him down.

Another interesting new perspective, is Mackay’s identification of Thomas’ traditional religious faith – he even went on pilgrimage to Santiago de Compostela, in 1523 – which will probably be a surprise to most readers, although she later indicates that he held deeply anti-clerical views – a combination of views that was by no means rare.

There is much less evidence available about the life of George Boleyn, but Mackay has uncovered some new material, particularly in relation to his literary and religious tastes, discussing a translation he arranged for his sister, of the evangelical Lefèvre’s ‘Epistles et Evangiles…’

Occasionally, Mackay’s passion for her subject leads her to be a little partisan – Thomas always gets the benefit of the doubt when any criticism of him by his colleagues surfaces, but he has had such an overwhelmingly negative press that a little nudge on his side of the scales seems only fair.

This work adds greatly to our understanding of the Boleyn family before Anne’s rise, and the important diplomatic and foreign affairs that they were involved in.