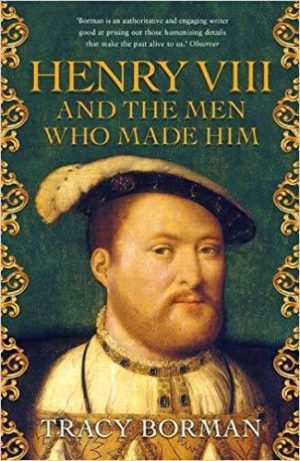 A study in fear and friendship amongst Henry VIII’s courtiers.

Henry VIII is probably the most written-about man in English history – from the magisterial biography of the king himself, by J J Scarisbrick, to the plethora of books about his wives, both collectively and individually.  It is hard therefore, to come up with a new angle – but Dr Borman manages it. Instead of looking at Henry’s women, she has chosen to concentrate on his men.  To an extent this has been done before, but usually via a biography of individuals. The odd collective biography has focused only on the major figures – Wolsey, More, Cromwell and Cranmer.

Borman’s sweep is far more expansive – she examines the influence, not just of the politicians and prelates, but of Henry’s personal friends – Sir Henry Guildford, Sir Nicholas Carew, Sir Francis Bryan, Sir William Compton, and others, including the lesser men such as Dr Butts or Will Somer. Numerous other men are named whom even the most avid Tudor scholars may not have heard of – men such as Sir John Welshbourne, Sir Edward Howard and Sir Thomas Knyvet. Dr Borman charts their rise and fall, and how they interacted with each other, as well as with their fearsome master.

What emerges is a psychological portrait of the king – his endless attempts to outshine his father, his determination to enforce his will against any opposition; his implacable anger against those who opposed him: these all hint at a paranoid personality, built on the shifting sands of inner doubt that made him lash out in rage. Yet Henry was not just a cruel tyrant – he was often swayed by genuine affection. His reluctance to sacrifice Wolsey, his continuing favour towards men who clearly did not approve of Anne Boleyn or the annulment, such as the Duke of Suffolk and Sir Henry Guildford, his protection of Cranmer against his foes, all show that the king was a man capable of real friendship.  Henry’s wild swings between suspicion and anger on the one hand, and affection and support on the other, with no warning, are what made him so dangerous to all who came within his ambit.  This see-saw of terror and triumph is apparent throughout the book.

One of the hardest things to do in a joint biography, is to create a flowing narrative as different characters move in and out of the limelight. Dr Borman’s talent as a writer and storyteller overcome this problem – her seamless transitions between the different threads even make it look easy.

There are a few places where more rigorous editing might have been beneficial – mistakes in Christian names, or the juxtaposition of events giving a slightly confused timeline, but these are minor points in a very informative book, written in Dr Borman’s usual engaging style.