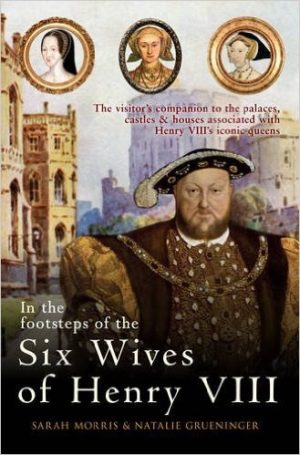 A treasure trove of information about the places where Henry VIII’s wives lived and loved.

So much has been written about the queens that it is a pleasure to have a different perspective through which to understand their lives. Morris and Grueninger have put together a comprehensive collection of all of the places associated with the six queens, not just the famous ones – Hever, Whitehall and Greenwich, but also the less well known, Chelsea, Dusseldorf Palace and Chenies Manor.

We are all, in different ways, products of our environment, and the analysis of the physical world that surrounded each of these six women, although it cannot give a complete understanding of her psychological make up can at least give us clues as to what influenced her.

In the section on Katharine of Aragon, we are introduced to the princess, not in the exotic location of the Alhambra, but in the endless movement of the Spanish court as Isabella and Ferdinand marched back and forth across their territories, bringing stability and strong central government to a previously divided land. The children had to put up with discomfort, boredom and often less than salubrious conditions, yet must be ready to put one regality at a moment’s notice. Perhaps it was this training that enabled Katharine to bear discomfort and emotional, if not real physical, hardship stoically, during her life in England.

With many of the locations of the women’s queenships being the same – Greenwich, Westminster, and Windsor for example – there is risk of repetition which is dealt with neatly by putting them together in a section at the start of the book, so that the individual entries under each queen are specific to her.

The wide range of places that is covered is quite surprising – the painstaking and meticulous work the authors have undertaken is plain to see. Where the places are still visible, there are descriptions, otherwise an extensive range of records have been trawled to give information about the history and physical aspect of the property as it would have been in the sixteenth century.

The section on Anne of Cleves probably has the most new material. The authors retraced the long journey from Cleves in the Empire, across the Low Countries to her new husband’s territory at Calais, stopping in palaces, hunting lodges and merchants’ homes. One of the most exciting elements of the book is the recounting of the authors’ work led to the hugely important rediscovery of the authenticity of panels bearing Anne’s arms, believed to be a copy, but proven through their work, and commissioning of a special study to be genuine: a well-deserved reward for their patience

A slight weakness, presumably attributable to the publisher, rather than the author, is the print layout. The font is small and feels rather cramped. I suppose this may have been to minimise the number of pages so that an already good-sized book did not become too unwieldy to travel with. It perhaps slightly limits its pleasure when dipping into it in the comfort of your armchair. I would perhaps recommend the kindle version for travel to overcome this.

No-one with a feel for historical place should miss this book.