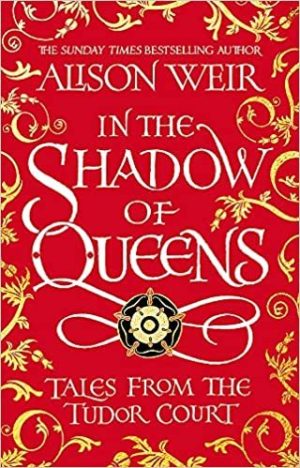 A very enjoyable collection of short stories on some less well-known personalities of the Tudor court.

The space between recognised fact and complete fiction is a wonderful place for historical novelists, providing the opportunity to fill in the gaps in our knowledge, to explore the potential “what ifs” of history and to give full rein, within the parameters of what is known, to their imagination. Weir clearly relishes experimenting in this space in her latest book, In the Shadow of Queens, a collection of short stories, written to accompany her Sunday Times bestselling series, Six Tudor Queens. Each of the stories was originally published as an “e-short” around the time the novel of the associated queen was published and have now been brought together in a collection in book form.

There are thirteen short stories in total, ranging across an eclectic group of subjects and a wide variety of topics. The extent to which each tale merges fact and fiction differs and is based, in part, on the variable amounts of information available on each queen and those associated with her.

“The Blackened Heart” takes detail from the autopsy report for Katharine of Aragon and the doubts of the Imperial Ambassador, Chapuys, that Katharine had died of natural causes, as a starting point for a story that incorporates poison, murder and the unsuspecting connivance of a faithful serving woman. Although it is a “tale”, it does raise the intriguing question – to what lengths would Henry and/or his closest advisors have gone to finally resolve the king’s Great Matter to his satisfaction? In “The Chateau of Briis”, Weir uses the vacuum created by lack of information on Anne Boleyn’s seven year stay at the courts of Margaret of Austria and Francois of France, and the mysteriously-named Donjon Anne Boleyn in Briis-sous-Forges, south of Paris, to create a tale of jilted love with a French nobleman for the young Anne.

The more imaginative tales have very helpful, and necessary, Author’s Notes that set out the details from the contemporary sources that inspired the story, enabling the reader to understand the parameters of knowledge within which Weir is working.

Several of the tales are more detailed “fleshing out” of personalities and characters who are fascinating in their own right but not central to the story of the queen with whom they are associated. In “The Princess of Scotland” Weir draws upon research for her biography of Lady Margaret Douglas to explore Margaret’s ill-fated love affair with Lord Thomas Howard, uncle to Anne Boleyn and Katheryn Howard. Henry VIII, on discovering their relationship, had both imprisoned in the Tower of London, where Howard died. Following her release, Margaret was sent to Syon Abbey for a period of time before, as is well-documented, returning to court and a flirtation with Charles Howard, brother of Katheryn. “The Curse of the Hungerfords”, intertwines the stories of Anne Basset, who served four of Henry’s queens at court, and her step-grandmother-in-law, Agnes Hungerford, who was subsequently convicted and executed for a brutal murder in 1518 at Fairleigh Hungerford Castle. This tale may appear at first reading as one of the more creative of the collection but, as Weir notes, it is firmly rooted in actual events.

Weir has used her detailed knowledge and love of the Tudor period, and its personalities, to create an assortment of sparkling tales. “In the Shadow of Queens” is a great read for lovers of imaginative historical fiction.

Tudor Times received a review copy of this book