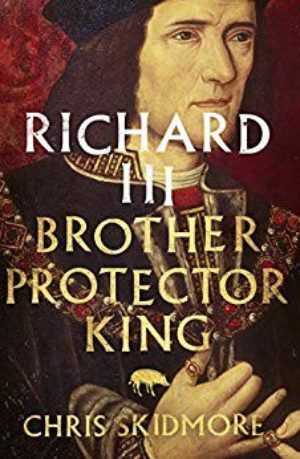 A balanced and thoughtful account of this most controversial of kings

The first thing most readers of biographies of Richard III want to know, is whether the writer has found new evidence about the fate of Richard’s nephews, the ‘Princes in the Tower’?  Pro-Richard readers are desperate for proof that their hero is blameless, whilst traditionalists scoff at the notion of any realistic solution to disappearance of the boys, other than that Richard had them murdered.

Having read Skidmore’s excellent work on Bosworth (reviewed here) I confess that I too, wanted to know how he approached the mystery.  But Skidmore presented me with a far more interesting concept – that in essence, it does not really matter whether Richard was responsible or not – the people of the time thought that he was. Traditional Yorkist supporters were willing to throw in their lot with an unknown exile, whose claim to the throne was not strong, rather than fight for Richard.

Skidmore is also interested in presenting many other aspects of Richard’s life. He opens the book with a little-known description of Richard’s court, written by a German member of the Emperor Frederick’s court, Niclas von Popplau. Perhaps this is to give a perspective on the king’s character – in Popplau’s account, Richard is extraordinarily generous and open-handed, but touchy and quick to take offence.

As the title indicates, the book is divided into three parts reflecting the phases of Richard’s life – most of it lived as the brother of King Edward IV, to whom he was conspicuously loyal, although, like all great magnates, greedy for lands and goods, and pretty unscrupulous as to how he acquired them.  Skidmore covers the background to the Wars of the Roses quickly and clearly, setting the stage for how Richard, aged nine at the time of Edward’s triumph at Towton, grew into a warrior prince, under the care of his charismatic cousin, Warwick the Kingmaker, who perhaps influenced Richard’s view of Edward’s wife, Elizabeth Woodville.

Moving on, to the events surrounding the rebellion of Warwick and readeption of Henry VI, Skidmore manages to combine a fast pace, with lots of detail, which I like. Knowing exactly where Edward landed when he fled into exile, and the details of the military manouevres at Barnet and the number of crayfish eaten at Richard’s coronation banquet give me confidence that the work has been well-researched, as well as helping me envisage events.

The second portion of the book concentrates on the events of spring 1483, so far as they can be known. Buckingham is depicted as a prime mover in the deposition of Edward V, influenced by his grievance with Edward IV about the unfair detention of part of his inheritance. A similar piece of chicanery on Edward’s part had encouraged Lord Howard, who believed himself to be the rightful heir to the Mowbray estates, granted to Edward’s younger son, to support Richard. Both men were suitably rewarded.

The third section covers Richard’s reign, his progress to the north, and his shock and horror at the news that Buckingham had turned against him. No more than any other historian can Skidmore come up with a credible reason for Buckingham’s sudden change of plan – other than that he wanted to be king himself – it seems laughable that he would rebel against Richard for the sake of the unknown Henry Tudor, who could grant no more than Buckingham had already received from the grateful king. Events move quickly from this point. Skidmore has corralled every possible snippet of contemporary information as to what was believed at the time – it is apparent that, whilst many would accept Richard taking the throne from his nephews, the idea that they had been murdered could not be stomached, and Richard paid the price in the loss of his life and his kingdom.

Skidmore’s Richard is a credible man and king – not a saint, but not the one-dimensional villain of some accounts. His book is well-researched, measured, and nuanced, avoiding much of the emotion that often surrounds this period.