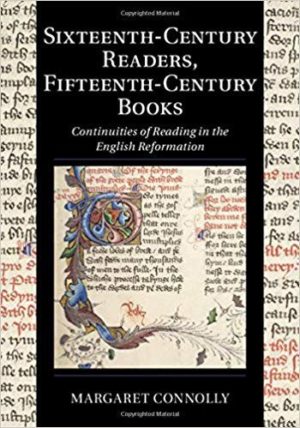 As general, rather than specialist, readers of history, most of us think of the English Reformation in its effect on the elite: who supported Henry VIII’s break with Rome, and who did not? Who amongst the ‘evangelicals’ of the 1520s went on to embrace Protestantism in the 1540s and 1550s?  How did those who resisted change manage to maintain their faith in the increasingly politically polarised atmosphere of Elizabeth’s reign, when to follow the faith of your fathers made you an enemy of the state.

Turning from the elite to the general populace, we may think of the effect of the Dissolution of the Monasteries on the poor, or the removal of some of the more onerous financial demands of the mediaeval church.  Seldom do we think of the effect of the Reformation on the intellectual and emotional life of the ‘middling sort’ – that section of society which increasing levels of literacy, the advent of printing, and financial security made receptive to the more personally focused religion of both late mediaeval Catholicism and the evangelical movement.

This oversight is beautifully addressed in Margaret Connolly’s book. She takes a London family, the Roberts family of Willesden, and looks at how the literature they owned can be interrogated to reveal how they adjusted to the extraordinary religious and political changes of the period 1470 to 1585, as several generations shared both manuscripts and printed works, some religious, others secular.  Connolly looks at how the life of the books themselves progressed – they were annotated, used as aides-memoires, treasured as heirlooms, and, in some cases, carefully updated to reflect the changing requirements of the law – an example being the excision of references to Thomas Becket, once the favourite English saint, but banished by Henry VIII into the outer darkness for the crime of defying a king.

Connolly is dealing with complex subject matter at the specific level of the volumes themselves – she makes forensic comparisons of the Roberts’ books with other known versions and suggests how they came into the ownership of the family, revealing links across the network of the London middle classes. Simultaneously, she uses tiny clues in the marginalia, the way the books were described in wills and inventories and the legality or otherwise, of the content over time, to build up a picture of the owners. The Roberts family were active readers, engaging with the texts, not just absorbing them. This was particularly true of Edmund, born during the heyday of Henry VIII’s positive relationship with the papacy, and dying during the decade in which Elizabeth’s government stepped up penalties against Catholics.

This is an academic work, but Connolly’s prose is clear and simple – not for her the deliberate obfuscations of academia. Her interest in her subject shines from every sentence, and her genuine desire to know, and to understand, how their reading shaped the Roberts family is infectious. I felt as though I were looking through the window at Edmund, sitting by the fire, pondering deeply and making careful notes as he read.

I have two quibbles, neither of which are the province of the author: the first is the depressingly high price of academic history books. Urge your library to obtain it, if you cannot justify the price. Although, in fairness, the quality of the production is extremely high - the paper is beautiful. The second quibble, even more depressing, is the use of American English spelling by the Cambridge University Press.  I’m sure Harvard does not use British English!

Tudor Times received a review copy from the publisher.