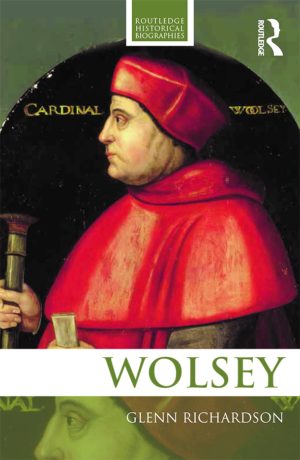 A refreshingly-well paced biography of Cardinal Wolsey, one of the greatest statesmen of the Tudor era, which combines scholarly rigour with readability.

The year 2020 marks the five-hundredth anniversary of one of the most spectacular public events of the sixteenth century – the Field of Cloth of Gold. Richardson’s new biography delves into the mind and motives of the man who organised it – Thomas Wolsey, Cardinal-Archbishop of York, Papal Legate, Lord Chancellor, and, some whispered, alter rex, of England. The book is a well-balanced mix of a detailed, academic approach to the topic, and a more contextual, wide-ranging and, ultimately, enjoyable style, likely to appeal to the well-informed general reader.

In good academic fashion, Richardson opens with a literature review – who has written about Wolsey before, what can be learnt from that work, and what is the niche into which this new work will fall? He pays homage to his two most significant predecessors as Wolsey’s modern biographers, Pollard and Gwynn, demonstrating that they developed different interpretations of the cardinal’s motives – the former that Wolsey intrigued ceaselessly to be Pope, and that latter, that he was always ‘the King’s Cardinal’. Richardson inclines more to Gwynn’s interpretation, but that does not mean that this book is Gwynn-lite. Far from it. Richardson’s work really gets under the skin of the diplomatic process that was at the heart of Wolsey’s time in office – the need to present ‘peace with honour’, so that the competing jealousies of Henry VIII, François I and Emperor Charles could be jostled into some kind of order. He elaborates on the importance of outward perception – focusing in the section on the Treaty of Universal Peace of 1518 on the arguments over who the French should send to England as hostages for promised payments for the repurchase of Tournai. For Henry to accept anyone less than men of high rank would be to lower the estimation of himself in the eyes of the world.

An interesting interpretation that Richardson brings to bear through the work, relates to the grandeur of Wolsey’s person style. As he notes, the cardinal’s reverence towards his official hat, his decision not to dismount when meeting the king of France and his maintenance of his status as a prince of the church above all of the secular nobles of the kingdom, have attracted almost universal criticism, from Shakespeare onwards. Wolsey has been seen as arrogant, grandiose, over-proud. This, maintains Richardson, is a misreading of his behaviour. Rather, the more he demonstrated power, the more he honoured both the king and the Church. Essentially, Wolsey understood that perception mattered in public life, just as much then, as now.

There is much of interest, too, about Wolsey’s educational establishments – his efforts at reform, and his attitude towards heresy – essentially, in Richardson’s view, Wolsey sought to educate, persuade and reconcile, rather than condemn or punish, those with unorthodox views. Where Wolsey failed, in this, as in other matters, can be ascribed to his tendency to centralise too much power to himself, refusing to delegate – consequently, he could never get everything done.

Richardson’s tone throughout is sympathetic to Wolsey – seeing the good in the man, as well as the weaknesses. His style, too, is very readable and he has the knack of covering enormous amounts of ground in a few clearly set out paragraphs. If you want to know more about Wolsey as a statesman, administrator, and diplomat, and even as a man, without wading through pages of political minutiae, then this is as good a biography as you will ever find.