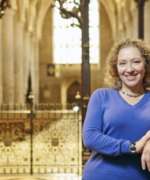 Following her time at Oxford, Sarah went into journalism and has written for most of the UK’s leading newspapers – The Times, the Guardian, The Telegraph (Daily and Sunday) – and magazines from Cosmopolitan to Country Living and Sight and Sound to The New Statesman. Her best-selling Tudor biographies, 'Arbella: England’s Lost Queen' and 'Elizabeth and Leicester', were followed by the widely-acclaimed ‘Blood Sisters: the Women behind the Wars of the Roses’.

Shortlisted for both the Marsh Biography Award and the Ben Pimlott Prize for Political Writing, Sarah is a Fellow of the RSA, and an Honorary Patron of Historic Royal Palaces.

Chapter 1: Setting the Board

The sixteenth century saw an explosion of female rule. Large swathes of Europe were under the firm hand of a reigning queen or a female regent - mothers and daughter, mentors and proteges. Game of Queens: The Women Who Made Sixteenth-Century Europe traces the passage of power from Isabella of Castile to her daughter Katherine of Aragon, and on to Katherine’s daughter Mary Tudor. From the French regent Anne de Beaujeu to Louise of Savoy, through Louise’s daughter Marguerite of Navarre to her own daughter Jeanne d’Albret, as well as to Marguerite’s admirer Anne Boleyn and finally to Elizabeth Tudor. No coincidence in the reign and the realm of Isabella of Castile that the queen in the game of chess took on the powers she enjoys today.

This was a sisterhood which recognised both their own bonds as women, and their ability to exercise power in a specifically feminine way - and that means that they have something to say to our own day. But as you map out the connections in your mind - an all-female family tree, through what you might call the ‘long sixteenth century’ - two women in particular stand out, a mentor and protegee. The latter a household name; the former far less well known than she should be, at least in the English-speaking countries . . .

The girl who arrived at the court of the Netherlands in the summer of 1513 was herself a courtier’s daughter. She’d have known that she might have a part to play in the advancement of her family - even, perhaps, a tiny part in great chess game of European politics. But no one - herself included - could have the faintest idea just how great a part that would be.

Just twelve years old, she had been handed over to a stranger and escorted from her home in the Weald of Kent to make the rare journey across the sea. From Hever Castle - because the girl’s name was Anne Boleyn; and the lessons she learnt in her continental education would change the course of history.

Anne arrived as one of the eighteen maids of honour waiting upon Margaret of Austria, the Regent of the Netherlands. ‘Whatever you do, place yourself in the service of a lady who is well regarded, who is constant, and who has good judgement’, one of Margaret’s own mentors, the French governor Anne de Beaujeu had advised, in a manual of instruction for her daughter. If Anne Boleyn was to learn the lesson that a woman could advance ideas, exercise authority, and control her own destiny, she could hardly have fallen into better hands.

In her early thirties Margaret of Austria was already several years into the government she exercised during the minority of her nephew, the future Charles V, and she was, what’s more, at the very heart of European diplomacy. ‘The most important person in Christendom, since she acts as mediator in almost all the negotiations between the princes’, wrote her one-time father-in-law Ferdinand of Aragon, flatteringly,

Margaret had herself known an extraordinary series of female role models - a veritable Who’s Who of matriarchy. Her mother Mary, the ruling duchess of Burgundy. had died in Margaret’s infancy, but a marriage contract with the young king of France, Charles VIII, took her as a toddler to that country where she would be raised by the formidable Anne de Beaujeu, running the country during her brother Charles’s minority.

That French marriage would never come to fruition - but its failure itself opened up the way for a new contract between Margaret and Juan, the son of the famous Spanish rulers, Ferdinand and Isabella. That marriage too ended early, with Juan’s death, but Margaret’s third marriage, to the Duke of Savoy, let her exercise power directly before being summoned to take up Netherlands regency

At the court where Margaret of Austria consulted with her council every day, Anne Boleyn would have observed (as Margaret herself had done in France and Spain) a woman exercising power in a way still unfamiliar in England – and perhaps even, within careful confines, enjoying her sexuality. For there was another lesson Anne Boleyn could have learnt in Margaret’s glamorous, cultivated sphere. The Netherlands (the old Burgundian) court was home to all the pageantry and parade of courtly love: that great game of sexual role playing which dominated upper-class Europe for three centuries, and still influences us today. This too was a game Anne learned how to play. Her time in the Netherlands would be comparatively brief - but only because the experience of another European court was soon coming her way.

When, late in 1514, Henry VIII’s younger sister Mary travelled to the French court to marry the old King Louis, Anne was one of the English ladies who came to join her - remaining there, moreover, long after Mary had danced her elderly husband into his grave and herself returned to her own country. Claude, wife to the new king Francois I, was an uncharismatic figure - but for all of that, Anne was now living in the sphere of some extraordinary ladies.

First was the king’s mother, Louise of Savoy. A distant relative of the French royal family she, like Margaret of Austria, had been raised in the care of Anne de Beaujeu. But Louise had also seen her adored son Francois move closer to a chance of the throne as one French king after another died without direct heir. Francois was a pleasure-loving 20-year-old when he inherited France’s throne - which meant that in the day to day business of governance, his mother had an important role to play.

Charles Brandon wrote to Henry VIII of Louise: ‘it is she who runs all, and so may she well; for I never saw a woman like to her, both for wit, honor, and dignity. She hath a great stroke in all matters with the King her son.’ A Venetian envoy was told that Louise of Savoy ‘lays claim to managing everything’.

But there was a third member of what was known as ‘the trinity’: Louise’s daughter Marguerite, who exercised huge influence at her brother’s court - and perhaps on the young Anne Boleyn. Cultivated, complex, the author of a number of published works, Marguerite was also a leader among the number of noble ladies seeking to reform the Catholic church from within. Anne, of course, would come to be identified with what we call the Reformation, a movement actually to reject papal authority - but it may well have been in France that the germs of her evangelical education lay.

But Anne Boleyn may have got also an emotional education in France - and in the Netherlands too. Marguerite of Navarre’s writings harp obsessively on the themes of women betrayed by men, and of sexual violence. It is possible she had herself suffered at the hands of one of her brother’s gallants, a man called Bonnivet. More certainly Margaret of Austria, during the very months Anne spent with her, had seen her reputation suffer from the advances made to her by Charles Brandon, with the active encouragement of his friend Henry VIII . . . That love was dangerous, that men could not be trusted, was a lesson Anne Boleyn could hardly fail to carry with her when she returned to England in the early 1520s.