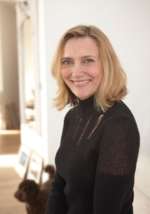 Elizabeth Fremantle has published two novels about the Tudor era: Queen's Gambit, about Katherine Parr, and Sisters of Treason, about the Grey sisters who menaced their Tudor cousins.

Her novels have been described by The Sunday Times as "Pacy, superb, harrowing. Terrifically entertaining." We are looking forward to her forthcoming novel, Watch the Lady, due to be published on 18th June 2015.

Elizabeth studied for a BA in English and an MA in Creative Writing at Birkbeck College, London. She has contributed to various publications including Vogue, The Sunday Times, Vanity Fair and The Financial Times and reviews fiction for the Sunday Express. She lives in London.

Many sixteenth century women have been edited by history, their lives having been deemed dull and unimportant as a result of post-Reformation propaganda that sought female models of Protestant virtue – docile, silent and above all desexualised – to hold up as examples.

So history has given us Katherine Parr, the meek and virtuous Protestant consort, a reputation that rejected her role as a political agitator and celebrated author; or Lady Jane Grey, the perfect martyr and innocent victim, a vision which ignored her as a highly intelligent young woman, driven by her zealous beliefs; and of course Elizabeth I, the virgin queen, a view that insisted on seeing her as only partially female – a castrated woman.

Elizabethan courtier, Penelope Devereux was a woman who led a remarkable and controversial life and yet her story was wilfully overlooked by history. Her biographer Sally Varlow attributes this to the sanitisation of the reputations of the two prominent men who loved her: the courtier poet Sir Philip Sidney, and Charles Blount, Earl of Devonshire, the man credited with quelling the Catholic threat in Ireland.

Much as Protestantism required exemplars of female perfection, it also needed men to embody notions of righteous nobility and chivalry. These two men – cultured, courageous and courteous – served that purpose perfectly, except for the fact of their association with a woman who had lived, according to the mores of the day, a questionable private life.

Reference: Sally Varlow, THE LADY PENELOPE: The lost tale of love and politics in the court of Elizabeth I. (2009) Deutsch