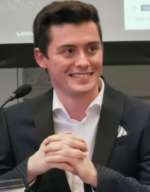 Peter Stiffell is a PhD candidate at the University of Kent examining the iconography of Mary I through portraiture and material culture. You can find him in art galleries and stately homes explaining to an unsuspected crowd the significance of a certain portrait. When he has free time he likes nothing more than to go on day trips and explore Tudor sites.

Mary I was England’s first crowned regnant. Born a princess, demoted to bastardy in her youth and denied her inheritance by her half-brother, Mary I had an emotional life, finally achieving her destiny on the 1st October 1553 when she was crowned in Westminster abbey. Though many see Mary I as a bloody tyrant or a fanatic, there is far more to this much-maligned queen than first impressions suggest. An aspect which is often neglected is the Marian imagery that emerged after the coronation. As England’s first queen, Mary needed imagery to promote not only her position, but to cement the love of her people. If we examine a variety of portraits and material culture such as medals and coins from the first couple of years of her reign it can be seen that a pattern emerges.

One of the first portraits commissioned in the reign was by the Netherlands artist Hans Eworth. Dated 1554, this is Mary showing herself as Maria Regina. Mary stands in a regal position; her cloth of gold gown fills the room against a red cloth of estate and a pillar of Hercules. The pillar symbolises her strength and stability as a ruler. It could also refer to the Virgin as man’s pillar to salvation; this iconography was mostly associated with the Habsburgs and is seen in Raphael’s ‘Oddi altarpiece’ (1502-3). Similar to Henry VIII’s portrait by Hans Holbein, both figures fill the space. Whereas Henry stands with his hands on his hips, his codpiece showing his fertility and his wide stance dominating the room, Mary’s gown parts at her waist creating a triangular shape while her top half also shows this triangular notion; both point to her womb suggesting her fertile state. The queen places her hands by her womb projecting her fertility. This projection symbolised her motherhood and as queen she was mother to her people.

This portrait shows Mary as an unmarried queen who does not hide her Catholicism. The cross she wears once belonged to her mother, Katharine of Aragon, while the reliquary which hangs on her girdle harks back to England’s famous Henry V; the reliquary was once in his collection. If we examine the reliquary it has the four Evangelists as its design and according to the jewel book of Henry VIII in 1520, it contained the relics of a drop of the precious blood of Christ, relics of SS Nicholas and Katherine, and a splinter of the True Cross. This symbolism cannot be reinforced enough. Not only is Mary showing her Catholicism, but each of these relics may have a personal meaning to the Queen as well as to her people. The precious blood recalls Christ’s sacrifice, glory and physical presence; he is with Mary. The blood also hints at martyrdom; perhaps a recollection of the martyrs who died for her cause including Thomas More and John Fisher? This portrait shows the viewer that England’s Catholic past has returned with her maiden queen.

A portrait commissioned by Charles V by the Netherlandish artist Anthonis Mor, also painted in 1554, is the image most commonly attached to the queen. If we examine the portrait, Mary is clearly married since she wears her wedding ring, meaning this portrait must have been painted after July 1554. The painting is realistic and was nothing England had seen before. Mary stares at the viewer; some have suggested this portrait identifies her as a bloodthirsty monster. However, this is not the case. Mor’s style was moulded to suit Habsburg iconography, the severe posture highlights her dignity as a queen. If we examine Mary’s face we can see that she is gently smiling; the only Tudor to be depicted with emotion. By examining the loose gown Mary wears it is possible that she is depicted pregnant since the portrait was commissioned during the first ‘pregnancy’. Therefore, this portrait not only shows Mary as a queen, but as a wife and future mother to the English and Habsburg heir. This child would be the physical bond of England and the Habsburg empire and Europe’s Catholic saviour; tragically, the child never came. Yet, this image must have pleased the queen for this portrait was copied in full length and in miniature form throughout Europe. As Philip’s wife, she had European significance.

As queen, Mary needed to be seen. In the words of Elizabeth II ‘I have to be seen to be believed’. For Mary this not only involved her own domestic subjects, but foreign courts. There are a number of portraits in foreign collections which use the Mor template. The contemporary art historian Carol Van Mander explained that Mor painted copies of Mary’s head for members of the Golden Fleece and for Cardinal de Granvelle (1517-86), a leading Habsburg statesman under Charles V and Philip II. These portraits can be found in Antwerp, Budapest, and Vienna.