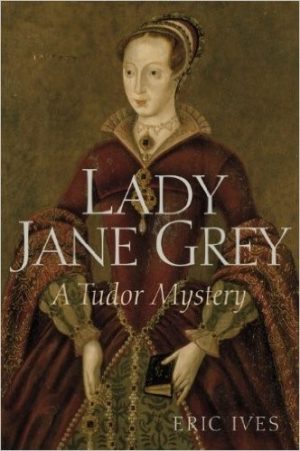 Professor Ives’ contention is that, far from Lady Jane Grey being an innocent victim of a plot by those around her to usurp the throne, she was, in fact, the legitimate heir.

The late Professor Eric Ives is an historian of renown, some of whose other works I have thoroughly appreciated, so I was very curious to read this book. Professor Ives’ central tenet is that far from being an attempt at usurpation, the accession of Lady Jane Grey in 1553 was a case of the Crown passing to the legitimate heir, and that her overthrow by Mary was the result of rebellion. This is not, of course, the received opinion, and I was eager to be convinced by new information or arguments. The ‘mystery’ of the book is how such an overthrow was achieved.

The format of the book, too, is slightly unconventional, in that rather than a narrative of events, he begins by describing each of the main protagonists in detail. This is very helpful, as it prevents lots of asides when the main action of the book is presented. Unfortunately, Ives’ predilection for Jane Grey results in a number of repetitions of incorrect facts and misogynist comments about Mary. For example he claims that Mary’s mother, Katharine of Aragon, encouraged her to see herself as ‘half a Hapsburg’. Neither Katharine nor Mary had any Hapsburg blood whatsoever. Nor is a description of Mary, aged 37, as ‘ageing’ likely to have been used of any male in the story. In fact, he refers to Northumberland’s achievements at ‘barely forty’ as ‘unique in Tudor England.’

Passing on to Edward VI, the information about the development of Edward’s authority, and how he moved from being a spectator in government, to beginning to formulate policy, is very persuasive. In particular, the detail about the development of the Devise for the Succession is comprehensive, although I found the statement that Edward ‘never even thought of his half-sisters’ as possible heirs bizarre. Of course he must have thought of them, as they were named in his father’s Will, and, in any event, within a few paragraphs Ives writes that Edward was deliberately creating a Will that ‘mimics Henry VIII’s own.’

Ives then goes on to consider the legality of Edward’s Devise. He first states that Parliament hadn’t granted Henry VIII the right to change the succession, because that would suggest that Parliament was of higher authority than the King, not the position in the sixteenth century constitution, but merely recognised Henry’s right. Thus, if Henry VIII had the right to change the succession by Will, so had Edward VI.I am not entirely convinced by that argument, as, although Parliament was not above the King, it was not necessarily the case that the King was above the law, although this was undoubtedly a murky area, not tested until the Civil War. It also does not accord with the wording of the act, which says ‘by the authority of the same (the Lords Spiritual and Temporal and the Commons) your highness shall have full and plenary power… to give, dispose etc.’

However, Ives establishes, to his own satisfaction, that Edward’s Devise for the Succession document was legal and thus, the proclamation of Jane as Queen on Edward’s death was fully justified, and totally in accordance with Edward’s wishes.This raises the other plank of Ives’ argument, which appears to be a complete exoneration of the Duke of Northumberland from any responsibility for the matter at all.

Ives contends, first, that the three marriages of May 1553 between Northumberland’s son and Lady Jane, Pembroke’s son and Lady Katherine Grey, and Northumberland’s daughter to the son of the Earl of Hastings, were no more than the usual aristocratic arrangements. He even goes so far as to say that ‘the evidence is that the initiative for Jane’s marriage did not come from Northumberland at all,’ and that suspicion about Northumberland’s motives was a post-event justification. He also adduces evidence that the other Privy Councillors were equally involved, although whether they were genuinely inclined to accept Edward’s Devise, or brow-beaten by Northumberland as they claimed, is debated. Ives’ view being that of Mandy Rice Davies in the Profumo Affair – ‘Well, they would say that, wouldn’t they?’

Having identified that there was widespread support for Edward’s Devise, Ives claims that this support was forthcoming because Henry’s attempt to settle the Crown on illegitimate off-spring was a subversion of common law that had made all property owners uneasy, and thus the choice of Lady Jane as successor was entirely consistent with a return to the rule of law. Unfortunately, he does not then address the question of why, if common law should be followed, Edward’s heir was not Mary, Queen of Scots? Or Henry Stuart, Lord Darnley? Even Lady Frances, rather than her daughter? All three of them would precede Jane Grey under common law.

Moving on from the legal issues, Ives addresses the events themselves, from the perspective that Mary’s refusal to accept Jane as Queen was an act of rebellion. The clear inference he draws is that the Privy Council just could not encompass the thought that Mary might rebel and therefore did not prepare thoroughly to circumvent it, rather than that they themselves were half-hearted. He also postulates that there was little objection to Jane’s accession amongst the nobility or gentry, or even the population of London. He also disputes accounts that Northumberland had difficulty raising men.

This interpretation paints Ives into a corner. If everyone who counted supported Jane, and the commoners were happy to serve in her army, where did it go wrong? It wasn’t even the defection of the six ships sent to patrol the Suffolk coast, and the dispatch of their guns to Mary, which is often postulated as the root of her success. Instead, Ives sees the collapse of Jane’s support as the fault of the Earls of Arundel and Pembroke who would not take military action themselves.

The final section of the book deals with the aftermath of the crisis.

Whilst I hesitate to criticise such an eminent historian as Professor Ives, I cannot help but feel that the arguments in the book lack a certain level of logical integrity and don’t necessarily follow from the information presented. The mystery is not really solved. In spite of my reservations, I would recommend the book as a detailed account of the events of the summer of 1553.